I found many treasures in my mother's attic, acumulated during more than 50 years of living and raising a family in the old house. But the thing that really rattled my rigging was the unexpected rediscovery of the minnow bucket in a dark and dusty cranny.

Long-forgotten, it possessed a potent power that now unleashed a flood of memories. To my brother, it was just another item of junk that needed to join the growing heaps of history slated for the landfill, but it sluiced me along in a stream of emotions.

It transcended my mother's death. She was gone, her visage, sound, and sensibility already slowly crumbling into the same sort of dusty memory that haunts this attic. But the minnow bucket leapt out of the dust that had for years obscured it, pushing cobwebs aside and memories before it, demanding recollection and sentiment without permission or hesitation. Somehow, this long-unused item had bounded past a generation, had dragged me backwards and pushed me ahead in the same instant. This was my minnow bucket, damn it brother, can't you see what that means?

No, of course you can't. It was just another piece of fabricated stuff, useless for years and forever useless. Simply a quaintly labelled product of the Mit-Shel Company, this Nu-Airflo "Better Bilt" minnow bucket had been solidly fabricated with old-world pride in Quincy, Illinois, before the middle of the last century. It "Keeps 'Em Alive For Days. The least motion automatically feeds 'em air." The bucket has about as much meaning as many other found objects in the attic: that strange, quickly-done painting of an elk on corrugated cardboard in a broken frame; or the screen on which 3-D images were once projected, its silvery surface now mostly a pile of flakes in the bottom of its container; or the Bach cantatas on 14-inch 78-rpm records.

But its rediscovery in a remote corner of the attic had opened unrecognized floodgates. The old minnow bucket's power to evoke images of childhood boggled my mind.

Actually two buckets, the inner, vented one could be suspended independently in any body of water to prevent oxygen starvation, a hazard to minnows. Another hazard is leaving them alone for too long. They get hungry. Very hungry.

This lesson and what it can mean was driven home to me once when, inadvertently, I left seven large, lively and happy minnows tied securely to a dock piling for five days. When I finally went to check on them, there were only two minnows in the bucket -- both extremely frantic and horribly battered-looking. The concept of food chain gained whole new meaning in that moment.

More memories flooded back. All those bluegills, yellow perch, pike, small-mouth bass, bullheads and crawdads in Illinois' and Wisconsin's lakes and streams. The scent of bait- and fish-handling hands. The shrimp, in Florida, that did just fine in the old minnow bucket, and were bait for the myriad fish that inhabited coastal waters. The clickety noise the shrimp made when startled into colliding with the bucket's side. Those sun-baked days, northerner's pale skin burning badly in withering heat on unshaded Flagler Pier. Sticky fish blood on the splintery planks. The whir of line spinning off a reel. Backlashes. Eels caught on doughballs made of Wonder Bread and shredded Kotex. Didn't need the minnow bucket for that, but the memories wouldn't stop.

No way could I just throw this treasure on the trash heap, like a pile of coho guts. But, amazingly to me, the bucket's fantastic worth went unrecognized at the estate sale; it didn't sell.

So when I hopped in the car to take a two-day meandering cruise around northeastern Wisconsin, to unwind a bit before returning to Cordova to finish my salmon season, I threw the minnow bucket in the trunk. There was a "Sturgeon Bay" on the map. Any place that had been named after a fish had to be special. My destination was set. 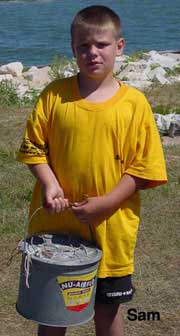 The sturgeons were long gone, seemingly replaced by schools of tourists. And by a sport-fishing industry whose explosive growth rode the backs of coho and chinook which thrived in Lake Michigan feeding on masses of alewives that likewise were not native. Sport was the goal, since even most gamblers shunned the odds of eating the PCB-laced salmon flesh. Salmon and smoked salmon found in the local markets was -- you guessed it -- farmed Atlantic salmon from the Pacific.

Outside of Manitowoc, I found what I didn't even know I had been looking for: a boy on a bicycle with a fishing pole. His name was Sam and, sure, he wouldn't mind having the old minnow bucket. Looks like a good one. They don't use minnows a lot because they are expensive, but sometimes ...

Maybe Sam will grow up to be a commercial fisherman, like the bucket's first owner. Probably he won't. Maybe the bucket will disappear into a closet, disappear forever. Maybe not. Maybe he will rediscover it when he is an old man cleaning out an attic. Maybe he will wonder what chain of events had brought him into possession of something so old, something that now evokes so many memories from his youth. Maybe.